Line comes from the 10-time French Champions and current UEFA Women’s Champions League winners, Olympique Lyon after a highly successful half season winning the 2015-2016 French Division 1 Title as well as the French Cup.

Prior to that, the 28-year old played for FC Rosengård (Malmö), with whom she won the Damallsvenskan (Swedish Top League) twice, and the Swedish Super Cup. She has also won Damallsvenskan with another major outfit Tyresö FF and played in 2014 UEFA Women’s Champions League final in Lisbon. 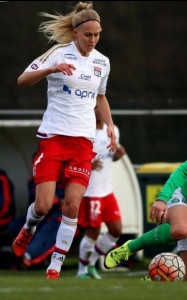 The Danish international with more than 100 caps to her name earned bronze medal with Denmark at the 2013 UEFA Women’s European Championships in Sweden and captained her National team on multiple occasions. She had this to say about her move:

“I am very happy. FC Barcelona is a fantastic club and I have a very special feeling about this. It’s a dream come true. I like their style of play and tactics; they like to keep possession of the ball. I’m really looking forward to playing here…The switch from Sweden to France was a big one. I developed as a person and as a player at Olympique Lyon. That’s what happens when you play alongside the best in the world every day.”

LTA Agency wish Line a lot of success at her new club.