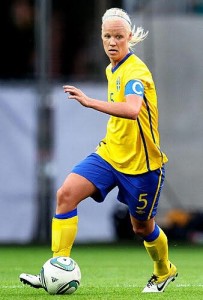 The 31-year-old midfielder joins Europe’s best team. Lyon have won the Champion League three times in the past 6 years and has played in two finals. They recently won their tenth straight league title.

It is a great challenge; one cannot go to a better club or get to a higher level. There’s a world class player in every position at OL, said Seger, and I feel happy to be staying in France and not to have to learn a new language.

LTA Agency wish Seger the best of luck at her new club and a very good season.