The Banyana Banyana edged past the hosts to be crowned Women’s African Cup of Nations 2022 champions tonight. They won 2-1 against Morocco in the final at the Prince Moulay Abdallah Stadium to lift their first ever title.

Jane played in every game for South Africa. They finished first in Group C and went undefeated throughout the tournament. The midfielder was named Player of the Match against Burundi and made the WAFCON Group stage Best XI. 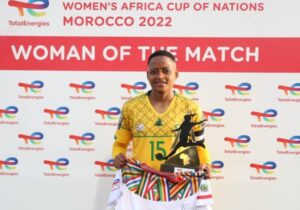 Twelve countries took part in the tournament. LTA Agency represented six players from four of those countries that are:

Zambia of Barbra Banda was awarded the bronze medal.

Cameroon made it to the quarterfinals with Ajara Njoya, Aboudi Onguene, and Genevieve Ngo Mbeleck.

LTA Agency is proud of Refiloe Jane and congratulate her on this achievement.